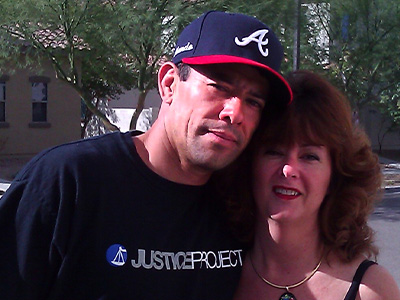 The Arizona Justice Project is proud to announce that in a courtroom filled beyond capacity, Judge Glenn Davis vacated Armando Castillo’s conviction.

Armando Castillo was convicted in 1998 for second-degree murder and child abuse. He was convicted based on the state’s shaken baby theory in which they argued that Castillo must have shaken Steven Young, his girlfriend’s two-year-old son, to death. Under this theory, if a baby had bleeding in the brain, bleeding in the eyes, and damage to the brain’s axons, then the baby must have been shaken by whoever was with the baby last.

Because Castillo was taking care of Steven the day he collapsed, the state assumed Castillo must have violently shaken him to death.  Castillo has always maintained his innocence. He had never hurt little Steven or any of his own three young boys. But in 1998, he didn’t know how to prove his innocence.

Ten years later, in 2008, Castillo contacted the Arizona Justice Project for help in proving his innocence. After an intensive review, the Project accepted Castillo’s case and immediately, student-volunteers from ASU’s law school began searching through the transcripts and combing the medical records, medical articles, and expert testimony. The Castillo team sought help from a nurse practitioner, Colleen Bonner, and a private attorney specializing in medical malpractice cases, Steve Leshner. The Project found experts willing to volunteer their time to Castillo’s case. Finally, the Project found what Castillo had been looking for all these years to prove his innocence. The team found that Steven didn’t die from shaking. He didn’t die from an injury inflicted on the day he collapsed. Instead, Steven died from an abdominal wound that was between a week and two weeks old.

The abdominal injury was present when Steven was rushed to the hospital not breathing. The surgeons tried to repair it. Steven’s history confirmed what usually happens with abdominal injuries of the type he suffered. He had flu-like symptoms for days prior to his collapse. He couldn’t eat. He was lethargic. Both of Steven’s parents and Castillo treated him by giving him Tylenol. No one knew that his symptoms were actually much more serious and were caused by the fluid seeping into his belly from the abdominal tear.

The problem for the doctors was that Steven also had the unexplained bleeding in the brain. The injury to the brain led the doctors and the prosecutors in the wrong direction. They latched onto the Shaken Baby Syndrome theory and ignored evidence of what actually caused Steven’s collapse and subsequent brain injury. The abdominal injury slowly caused a decrease in his blood pressure. His oxygen levels dropped and he suffered shock. When he went without oxygen to the brain for an extended period of time on the way to the hospital, his brain became hypoxic. Upon arrival, there was really no hope that he would recover.

Problems with the State's theory

The problem with the State’s theory was that none of Steven’s injuries were new, and there was no evidence of shaking. The medical examiner found no bruising on Steven’s torso, no injuries to his neck, and no damage to his spinal cord. If someone abused Steven, it was not Castillo and it was not on the day of his collapse.

The Arizona Justice Project gathered reports from five different experts. They all worked independently without knowing what the other experts in the case had opined, and they all came to the same conclusion. Steven did not die from injuries inflicted on the day Castillo watched him. Armed with this new evidence, and compelling studies proving the foundations of shaken baby syndrome no longer sound, the Arizona Justice Project prepared a post-conviction petition arguing that Castillo should receive a new trial based on this newly discovered medical evidence. The Project also argued that Castillo was entitled to immediate release because this overwhelming evidence supported his claim of innocence.

On the very day all briefing in the case was complete, the judge who had previously sentenced Castillo to 27 years in prison issued an unprecedented order. Without even waiting for the evidentiary hearing, the judge found that Castillo had presumptively proven that he was entitled to relief on both the second-degree murder and child abuse convictions. The judge’s order paved the way to an agreement. To avoid an evidentiary hearing, the State agreed to vacate Castillo’s conviction, reserving the ability to try him again if they find evidence to support a new conviction. However, Castillo and the Project are confident that the advances in science will convince the State, as it convinced the trial judge, that Castillo never hurt Steven.

The Team who made justice possible

Since his recent release, Castillo spends every day texting the volunteers that made his release possible – Colleen Bonner and Steve Leshner, Erin Ronstadt, a recent ASU law grad who stepped in to help when the case became overwhelming and needed another attorney, Larry Hammond, who loaned support to ensure Castillo was released in a timely fashion, Carrie Sperling, who guided the team over the past three years, and Sheri Castillo, who always believed in her husband’s innocence and worked tirelessly to move the case forward.

As with all Arizona Justice Project cases, the team effort goes well beyond these people. Dozens of students dedicated their time to Castillo’s case. Experts willingly devoted hours of their unpaid time. Finally, lawyers in the community came forward to share their research and experiences with the team so that they could piece together a more compelling case. Although Castillo can’t text them all, we know he would like to thank everyone involved in this victory.