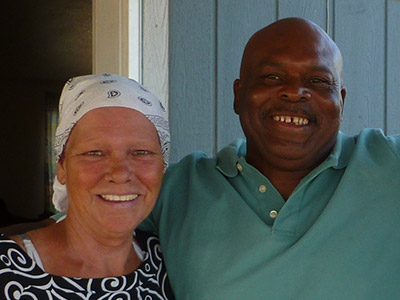 Wrongfully convicted of murder, given relief after serving 10+ years

In 1998, Larry was convicted of first degree murder, aggravated assault, armed robbery, aggravated robbery, burglary, and theft. His case was settled on appeal after evidence revealed that he was wrongfully convicted.

hidden
The Day that Changed His Life

On Valentine’s Day, 1997, two masked men crashed through the window of a Safeway in Coolidge, Arizona. During the ensuing robbery, money was taken from the store safe and one of the armed assailants shot and killed a store manager. The lone eyewitness could only vaguely identify the suspect as being 6’4”, 240 pounds. Hours after the crime, a local man, known by many to be seriously mentally ill, confessed to the crime and identified Mr. Bishop as his cohort.

As a result of these statements, Mr. Bishop was arrested the day after the crime, and the police investigation seemed to come to a halt. The state, although unable to provide physical evidence connecting Mr. Bishop to the crime, sought the death penalty against both men, and because the case included the possibility of a death sentence, Mr. Bishop was appointed two attorneys to represent him. The first jury acquitted his co-defendant, the seriously mentally ill man who had confessed and implicated Mr. Bishop. However, it was unable to reach a verdict as to Mr. Bishop.

Perhaps realizing the weakness of their case, the State decided not to seek the death penalty at the retrial of Mr. Bishop. This meant that Mr. Bishop was now only entitled to one lawyer for his defense. Devastatingly for Mr. Bishop, the more experienced attorney at his first trial withdrew from the case, which left the less experienced attorney working under immense time pressure, with limited resources, new facts and minimal trial experience.

During the second trial, more than a year after the crime, a new witness came forward and testified that she overhead Mr. Bishop, along with several other men, at her trailer on the night of the crime and that her boyfriend retrieved guns for one of the other men. The next morning, one of these men (not Mr. Bishop), picked up the suspected proceeds of the robbery from this trailer.

Although the State’s case against Mr. Bishop had drastically changed because of this new evidence, and indicated an alternate suspect, defense counsel was only given an investigator to assist him on the first day of the second trial. Not surprisingly, the defense was unable to uncover additional helpful evidence for Mr. Bishop in this short period of time. Despite his unwavering assertion of innocence, Mr. Bishops was convicted on all charges.

Ten years after the verdict, at a federal hearing on Mr. Bishop’s claim that his counsel was ineffective, evidence came to light that should have resulted in Mr. Bishop’s acquittal. For instance, a police report, dated the day after the crime, identified both another man as the shooter, and the make of the gun used in the crime, information that was not public knowledge at the time of the report. In addition, the man at the trailer with Mr. Bishop, who picked up the proceeds, matched the physical description given by eyewitnesses as opposed to Mr. Bishop, who is nearly ten inches shorter and 100 pounds lighter than the description. The attorney also failed to present numerous facts in police reports that could have been brought to the jury’s attention, utilize experts and request additional DNA analysis. Instead, because of these deficiencies, the jury was left with only a partial picture of the crime.

However, as a result of the Arizona Justice Project’s efforts, the Pinal County Attorney’s office agreed to settle the case on appeal. Due to the long appeal process on his federal claim, which could have lasted for years, Mr. Bishop decided to plead guilty to the lesser charge of armed robbery, with credit for time served.